Tracy Tutor Maltas is currently the most recent cast member added to the show Million-Dollar Listings Los Angeles on the Bravo network. The interesting thing about adding Tracy to the team is they finally decided to add a female real estate agent to the show after being on the air for nine years.

Let’s get to know Tracy!

Currently, Tracy works is one of the top real estate agents for Douglas Elliman California, and she’s going to continue to dominate her field because she has a top-notch in-house team, she’s worked hard to develop strong relationships, and she’s even personally in touch with some of the hottest builders, architects, and designers in Los Angeles.

Also just as important, Tracy is out there representing some of real estate’s most powerful and popular brands. Because of this, she has helped facilitate the sale of more than $400 million in branded real estate developments. Most recently, she has even chosen to represent the West Hollywood Edition Hotel and Residences which will be launching in Los Angeles at some point during the early portion of 2018.

It should come as no major surprise to anyone that Tracy has a very large presence on Instagram. Unlike other celebrities of her magnitude, she posts on the social media site on a semi-regular basis, and at the time of this writing she currently has 538 posts on the site. Not only that, but the expert real estate agent and star of the hit TV so Million-Dollar Listings Los Angeles currently has 20.1 K followers, which is definitely a respectable number of people looking to check out her regular updates.

As far as her updates are concerned, she likes to post about a wide variety of topics on her page. While it certainly showcases her television show and her real estate endeavors, she also likes to post much more than stuff about her business and career.

As an example, the top post on her profile is a video of Oprah Winfrey’s speech at the Golden Globes in 2018. Oprah gave a very rousing speech, and Tracy mentioned that Oprah Winfrey is one of the most inspiring women that she has ever seen in her lifetime. Other posts found on her Instagram channel are pictures of her, her friends, her colleagues, and even her family. Although Tracy and her husband are on the verge of divorce – which we’ll talk about in a minute – she still has many pictures of her husband and two daughters on the site and there’s no reason to take these beautiful pictures down anytime soon, even if her soon-to-be ex-husband is about to be out of the picture. 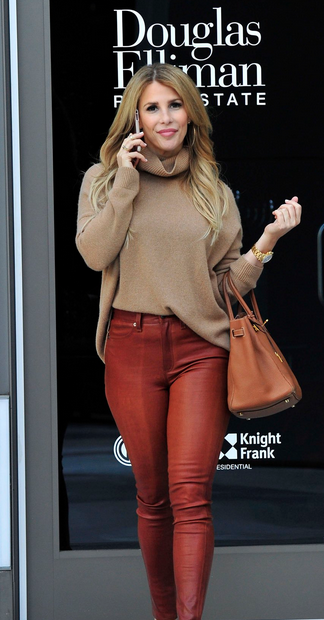 Even though the end of their marriage is a foregone conclusion because Tracy and her husband Jason Maltas filed for divorce at the end of December right before the new year began, it appears to be a completely amicable split between both parties in the couple. (You can read about it here.)  So if any of you reading this were looking for a knockdown, drag-out, major court battle over their assets and custody of the children, it doesn’t seem like this is going to happen. You never know, but I wouldn’t get my hopes up if I were you.

In fact, according to the documents filed with the judge and court in Los Angeles, the couple is splitting up permanently due to irreconcilable differences. That seems to be enough to put an end to their 13-year marriage, which is a good enough reason for most people since you don’t want to stay in a marriage if you don’t get along, don’t agree on many things, and ultimately want to go your separate ways.

As far as their daughters are concerned, Tracy is currently asking for physical and joint legal custody of the both of them. And according to the file documents, neither Jason nor Tracy should expect to receive spousal support. In fact, it appears that there is a prenuptial agreement that was already in place in case divorce was ever to happen. So spousal support is a non-issue at this point.

Many people are interested in learning Tracy’s net worth, but unfortunately, this was a number that I just wasn’t capable of digging up. The one thing I do know for certain is that there are certain facts and figures floating around about specific real estate deals she’s completed throughout the years.

As mentioned earlier, as she sold over $400 million worth of property for one high profile client. She also sold a home in Brentwood for $8.1 million, a home in Malibu to Edward Norton for $11.8 million, and she apparently sells many million-dollar homes each and every year. As you can imagine, she is a multimillionaire and she has a very large net worth. Sorry I could not provide an actual figure because the information just isn’t available on the web at this time.

To wrap things up, we’d like to let you know that Tracy Tutor Maltas is still young, vibrant, and very attractive at the sophisticated age of 42, in early 2018.  Looking at her pictures, you’d have a hard time determining that she is this age, because she obviously takes great care of herself, works out, and really makes every effort to put forth a phenomenal appearance.

Wrapping up her Bio

Clearly, Tracy Tutor has a very busy and fulfilling life. She has two beautiful daughters, recently completed a satisfying 13-year marriage, and has two great jobs. What more could a sophisticated lady ask for?